skip to main | skip to sidebar

Time for more upgrades to the AMPhibian.  The epoxy skin job has held up well, no more cracks in the two years since I did it, so it's obviously time to stress it even more.  One large drawback of the plastic bathtub design of AATV's is the lack of mounting points for any sort of equipment.  The solution is to make an angle iron "belly band" that goes around the perimeter seam. 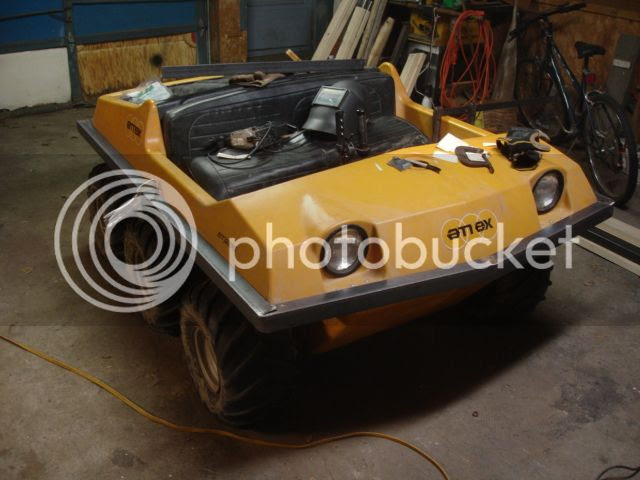 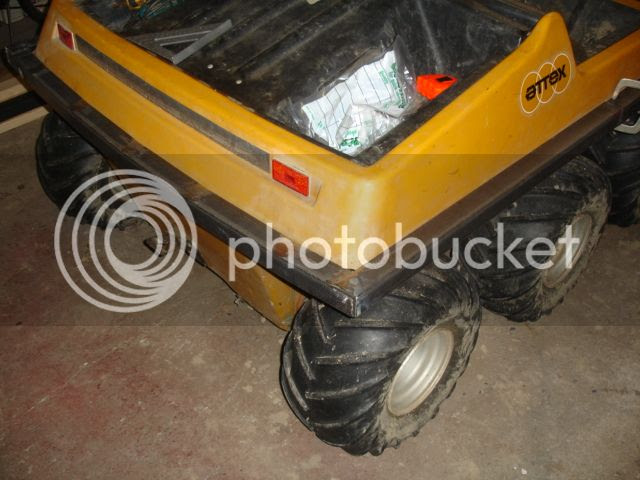 The purpose of this was to allow me to attach a plow.  I wanted to cut a trail into a steep side hill leading down to my stream.  I wasn't sure if the AMPhibian would have the traction and power needed so before I got too far into the project I slapped together a crude mount that would allow me to test the capability for bulldozer duty. 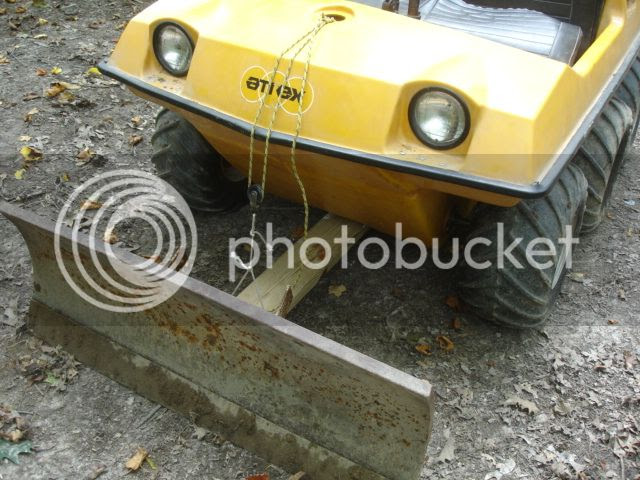 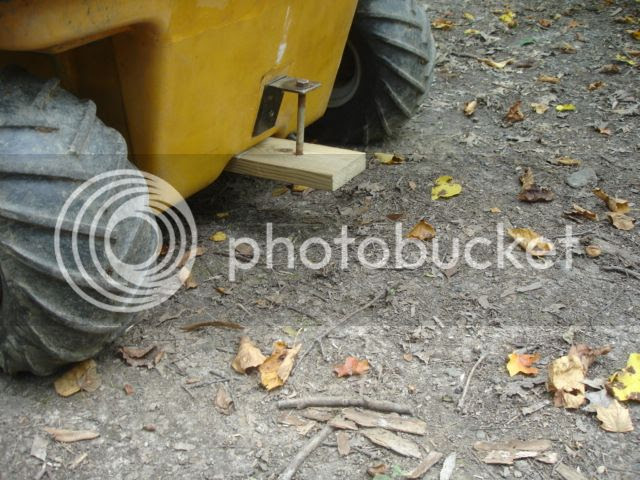 It worked well enough that I used it as is for quite a while and moved some significant dirt, before the wood finally split. 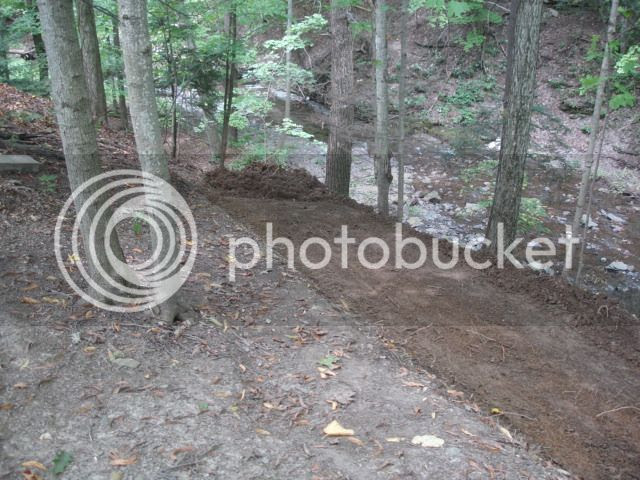 I brought it into the shop and began the transformation from wood into steel, including the belly band.  The design was adapted from a similar setup I'd seen on 6x6 world. 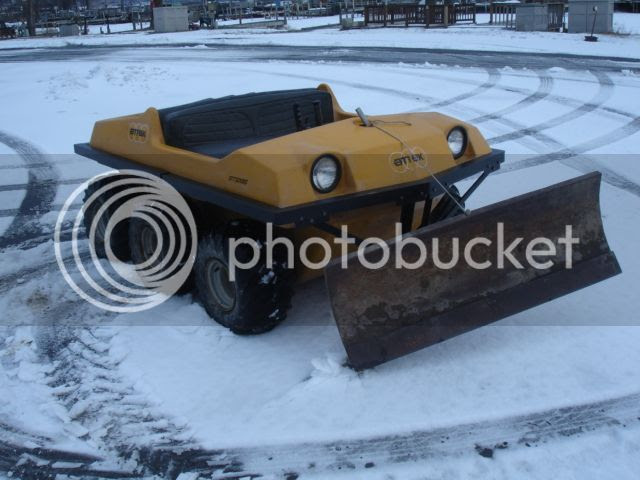 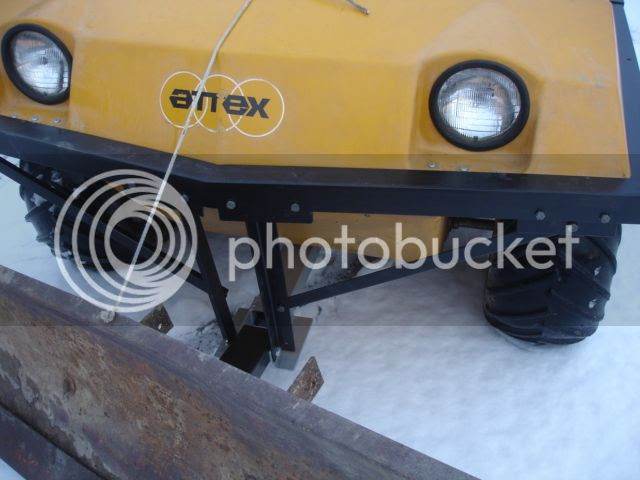 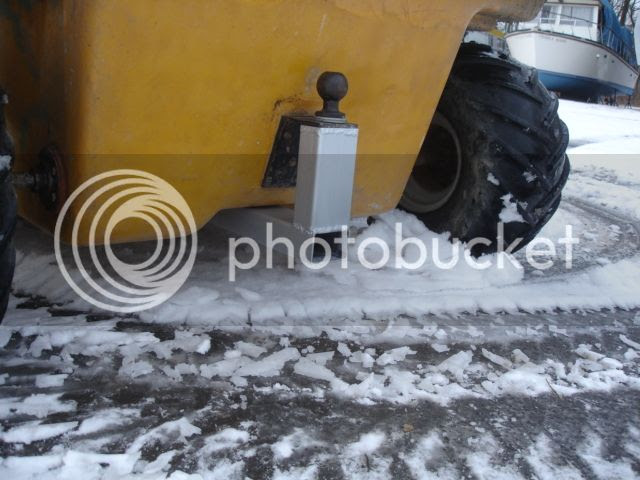 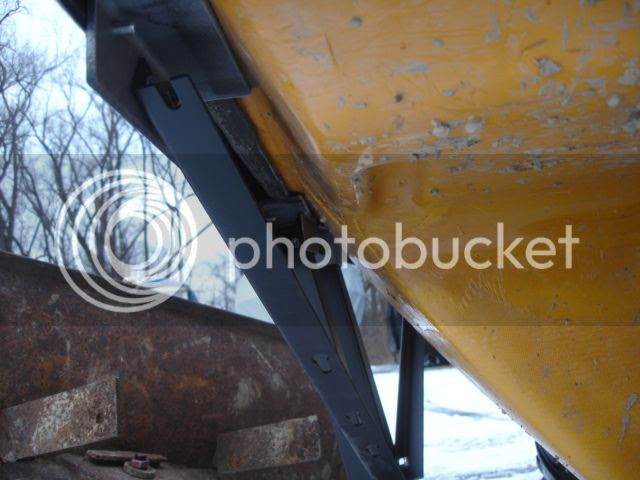 The angle iron pieces act as clamps to hold the belly band in place without drilling into the plastic and weakening it.
Before the ground was frozen I was able to get the trail in passable condition, though it needs more grading to reduce the slope so it's not such a scramble to get back up, especially when wet and muddy. 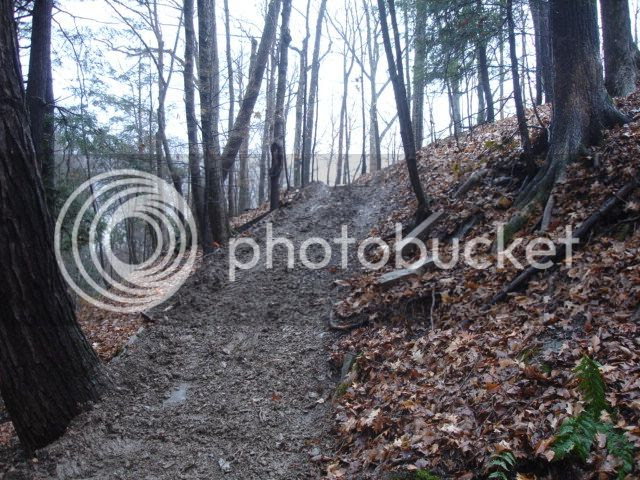 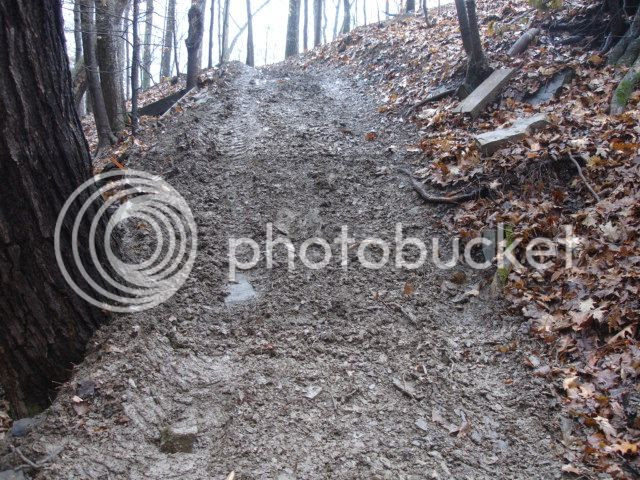 Now the plan is to get two 24 Volt linear actuators to move the blade up and down, each running off one half of the 48 Volt pack.  Using two will also allow me to add tilt capability if I wish.  I don't think I'll bother with power angle, but who knows.  With the belly band in place maybe I'll finally get around to building that rollbar.
Posted by John at 8:32 PM

John, I have been following your project on both this blog and 6X6
world, Very cool. I am restoring a Attex and am planning on copying your fiberglass job. Can you tell me what product you used and how much it took ?. I have a second attex an terrain tamer. it has the Baker Hill 5000 trans. I am thinking about de-iceing it and electrifying it. I will let you know how it procedes. Is there anything you would do differently now knowing what you know now ? Thanks in advance
hawksmore@msn.com. check out our site. www.tacticalavianpredators.

I used the thin epoxy system from these guys http://www.shopmaninc.com/epoxy.html with a medium hardener to allow enough working time. Cleaned the surface well and roughed it up with 24 grit, laid down some 8.5 ounce biaxial or twill fiberglass cloth,
http://www.shopmaninc.com/cloth.html#eglass
and wet it all out. One thing I'd do differently here is when it was almost hardened up I'd spread on another layer of just resin to better protect the cloth from abrasion.
For the EV conversion I'd use lithium prismatics instead of the Odyssey AGM's. Price is about the same now and the lithium will last longer, weigh less, and can be more deeply discharged so you'll get more actual run time for similarly rated batteries. The Odysseys were rated at 69 amp hours but 60 amp hour lithiums would give more usable capacity. I'd probably use CALB cells. If looking for more speed you might want to run 72 Volts instead of 48, or gear it differently if you don't need as much low end power. I might also look at an AC system from HPEVS, though cost would be higher.
http://hpevs.com/
A used series DC forklift motor in good shape and an Alltrax DC controller is probably the least expensive way, and it worked out fine for me.

Hey John,
I am a current high school student in an advanced physics course. Our project this term has been to do an electric conversion to a MAX IV that our school has acquired. Seeing your blog and your expertise has been really helpful thus far in our process. I would love to be able to set up a dialogue and communication with you, if you are willing.

If you have any questions, it would be great if you could contact my teacher: Brendan Creagh at Bcreagh@deerfield.edu

Thanks.
Look forward to talking with you,
Reid Shilling

Glad to help, I'll send an email to your teacher.

Hi John. I want to communicate with you.
My name is Adrian, I buy a used AC31 kit as you used in your own Fiero. I want to ask you some questions. My email is admdq@hotmail.com, please write me so I can contact you.
I await your email, greetings!
Adrian