skip to main | skip to sidebar

AMPhibian gets a new skin and goes for a swim

The 40 year old ABS plastic was hittin the "crack" pipe way too hard and needed an intervention so I put the old AMPhibian in for some major rehab. Stripped it, flipped it, and hit it with 24 grit to rough up the surface for epoxy resin and fiberglass cloth. Glued up the cracks with some SEM epoxy bumper repair goo and some two part methacrylate glue, both seemed to work fairly well as long as I "V'd" out the cracks really well, then applied the cloth and epoxy laminating resin. Feels pretty tough so far but I haven't beaten on it with a hammer or anything, I'll wait and see what happens naturally during use. I had planned to put a HDPE skid plate over that but it didn't exactly come out the way I had hoped. I had a space heater, heat lamp, heat gun, and a small propane torch with a flame spreader but could not apply enough heat over a large enough area to get smooth compound bends. I ended up with warping and lumps and probably a ruined 4x6 piece of HDPE. So for now I'll just see how the fiberglass holds up alone. 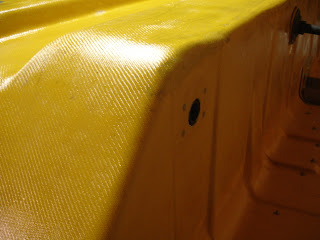 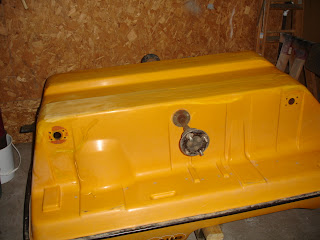 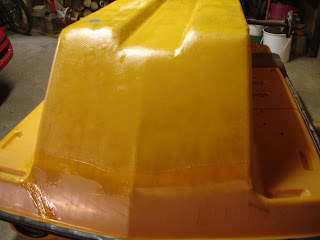 I also retarded the motor timing back to neutral for greater torque. Since I'm not running higher voltage the advancement wasn't necessary, though I did lower my top speed by about 4 mph. Not much of a concern for my purposes.

Since the cracks were finally fixed I took it for a dip. A little heavy in the back end but it does float. 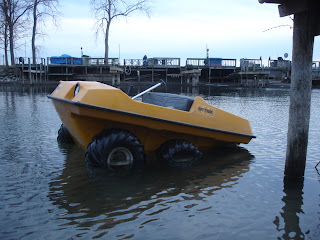 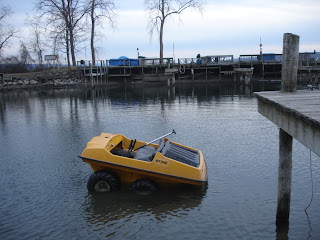